Learn about the PQRST waves of your heart’s electrical system, how you can identify them on your Apple Watch ECG, and what they might indicate about your heart health. 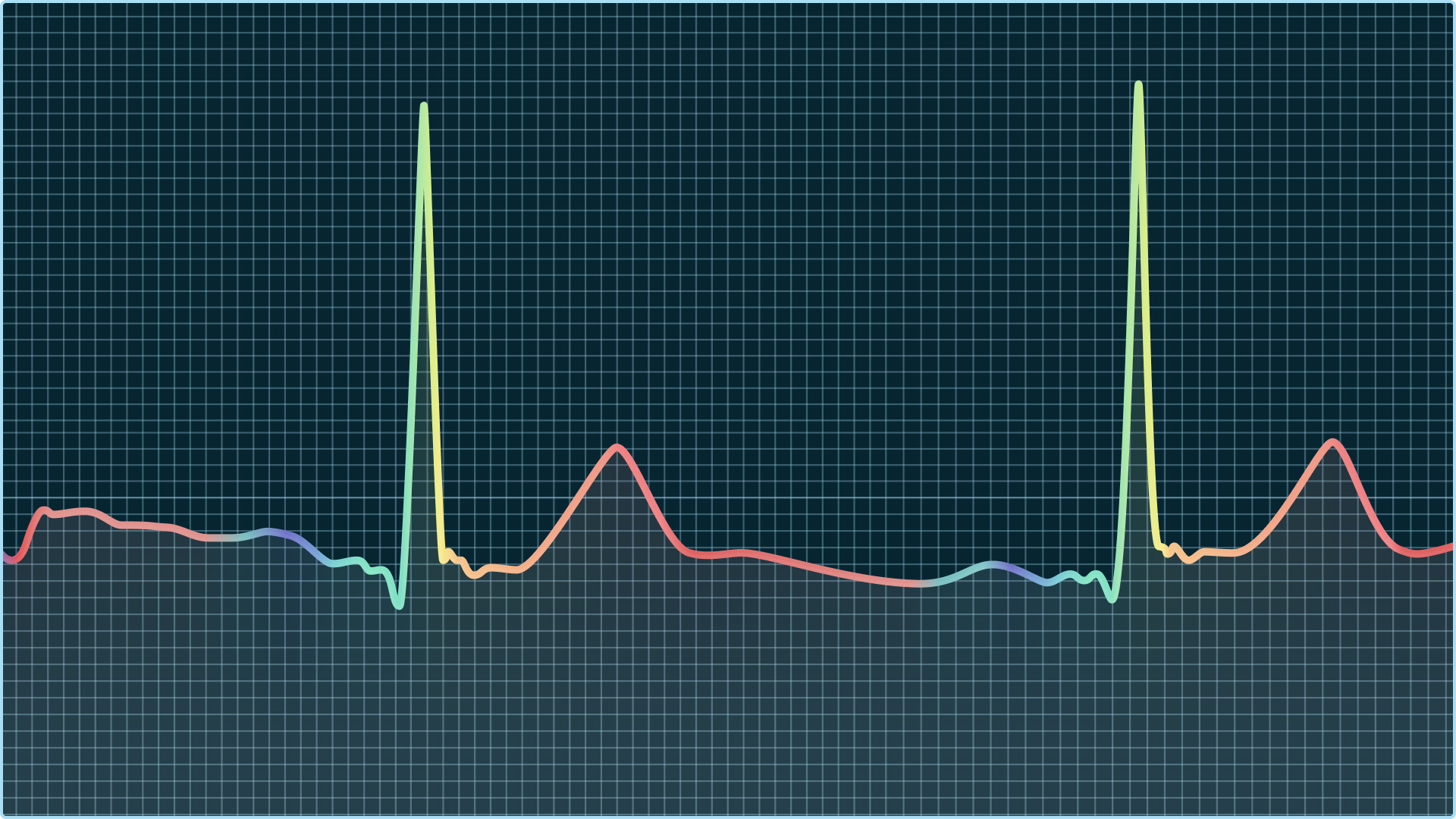 If you’ve ever gotten an ECG from a hospital, or if you’ve searched for arrhythmias like Atrial Fibrillation, you’ve likely seen the letters “PQRST.” You may have seen wordings like:

“The QRS and QTc intervals are abnormal for this ECG”

“In patients with Atrial Fibrillation, P wave will not be seen in their ECG”

So what are these PQRST intervals? How do you identify them on your smartwatch ECG? And what do they mean for your heart health? Let’s dive in.

What does an ECG measure?

Your heart has its own electrical system. With each heartbeat, this system sends an electrical signal from the top part of the heart all the way down to the bottom. This causes the muscles in your heart to squeeze, pumping blood from the heart to the rest of your body. An ECG measures this electrical activity.

Diving deeper, each heartbeat is characterized by the contraction and relaxation of the upper and lower chambers of the heart, known as the atria and ventricles, respectively. The contraction and relaxation of the atrium and the ventricles is caused by an electrical impulse that travels through the heart, enabling it to pump blood through the cardiovascular system. This is represented on the ECG as a series of waves: the "P wave," followed by the "QRS complex" and then the "T wave." Hence, the term P-QRS-T.

After the electrical impulse originates from the sinoatrial (SA) node, or “command center” of the heart, it stimulates the contraction of the atria, or upper chambers of the heart. This is represented by the first low-amplitude wave, known as the P wave. The first 1/3 of the P wave corresponds to right atrial contraction, the final 1/3 corresponds to left atrial contraction, and the middle 1/3 is a combination of the two. The atrium then relaxes, but this is not visible on the ECG because of the low amplitude of this electrical signal.

This is easily the most recognizable wave on the ECG. As the electrical impulse from the SA node makes its way down to the ventricles, it then has to spread throughout the entire ventricle for it to contract, or squeeze, at the same time. There are specialized wires in the bottom of the heart, known as the right and left bundle branches, or the His-Purkinjee system. These help spread this electrical signal as evenly as possible. This contraction of the left and right ventricles is represented by the second wave that looks like a high-amplitude spike, known as the QRS complex.

The third wave that you see immediately after the QRS complex is known as the T wave, and it represents the relaxation of the ventricles.

Here are a few of the important intervals that you’d find on most ECG reports.

What does it mean when the PR interval is prolonged?

What does it mean when the PR interval is shortened?

The PR interval is considered shortened at and below 120 milliseconds. The PR interval can be short when the electrical signal takes less time than normal to get from the top of the heart to the bottom. This can be a normal, healthy variation called “enhanced AV node conduction”. This can also happen if there is an extra connection between the top of the heart and the bottom, in a condition called “Wolf-Parkinson-White Syndrome”.

The QRS interval is measured from the beginning of the QRS complex to the end of the QRS complex. As we’ve already seen, this represents the time it takes for the contraction of the left and right ventricles (bottom part of the heart).

The QRS Interval is considered normal up to 120 milliseconds.

What does it mean when the QRS interval is prolonged?

The QRS interval is considered abnormal at and above 120 milliseconds. The QRS interval can widen when the electrical signal takes longer than normal to go through the bottom of the heart while it is contracting. This is often seen when there are abnormalities in the electrical system of the heart, affecting one of the specialized electrical fibers called the “bundle branches”. Scarring in the bottom chambers (ventricles) can also cause the electrical signal to spread more slowly and can lead to a wider QRS interval. Although these issues are commonly seen in those with heart problems, some people without any heart disease can also have a wide QRS.

The QTc interval​​ is measured from the beginning of the QRS complex to the end of the T wave, and is adjusted for heart rate. This represents the time it takes for the bottom part of your heart to contract and then electrically reset itself.

When an electrical signal travels throughout the heart, the electrical state of the heart cells is changed. The heart then has to “reset” itself and change the heart cells back into its normal state to get ready for the next heartbeat. The amount of time it takes for the electrical signal to travel through the bottom of the heart, and then “reset” itself is the QT interval. We expect this to happen more quickly when the heart beats faster, which is why we need to correct for the heart rate using a mathematical formula (most commonly used is the Bazett formula). This is what the “c” stands for in QTc. The QT interval is measured from the beginning of the QRS complex to the end of the T wave. The QRS represents the ventricles contracting, and the T wave represents the ventricles electrically “resetting”.

What does it mean when the QTc interval is prolonged?

The QTc interval is considered prolonged at and above 450 milliseconds for men, and at and above 470 milliseconds for women. The QTc interval can prolong when the electrical system in the bottom of the heart is not working properly. This is commonly seen as a side effect of some medications. However, this can also be seen when someone has other heart problems such as heart failure or with electrolyte disturbances. In very rare cases, there can be a genetic abnormality that leads to this prolongation.

What does it mean when the QTc interval is shortened? 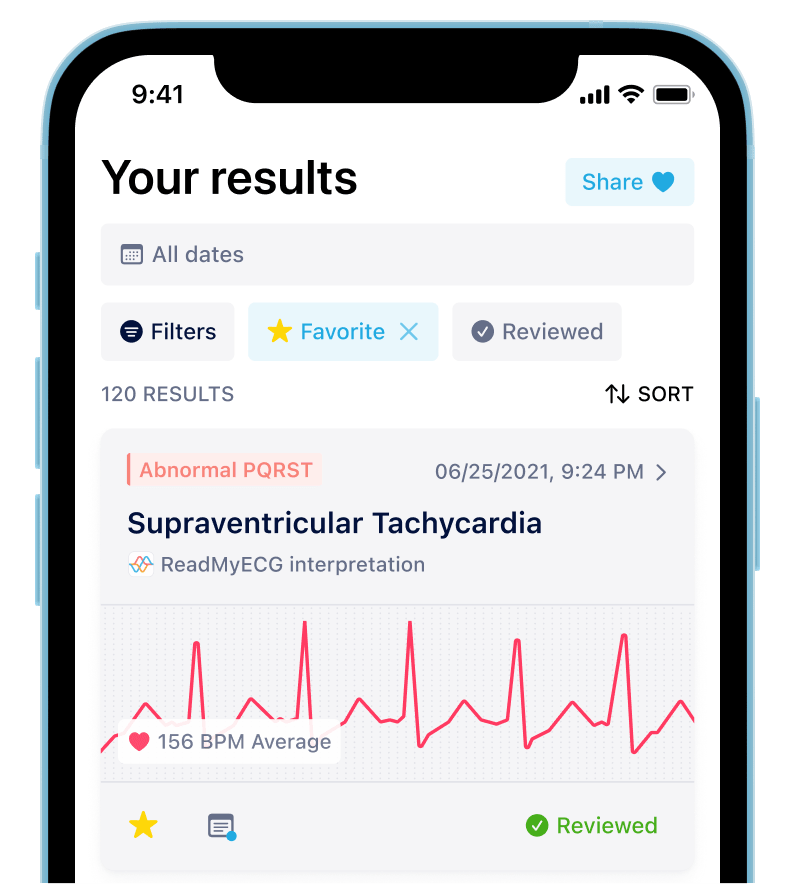 Don’t have an Apple Watch?
Join the waitlist.

Be the first to know when ReadMyECG is on Fitbit, Samsung, and other non-Apple smartwatches. In the meantime, stay heart healthy!